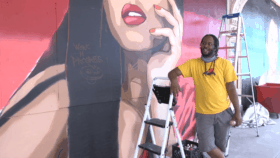 From educational programming to larger-than-life portraits and top-tier live entertainment, the arts are a crucial part of what makes Minnesota special.

Explore stories about the local impact of the arts The District and broader downtown have been devastated by the pandemic and unrest, leaving an area filled with shuttered businesses and a lack of meaningful activity. With this mural, we’re looking forward to flipping the narrative. Artist Reggie LeFlore crafts portraits with vibrant colors and contemporary elements that aim to capture the energy and spirit of his subjects’ stories. LeFlore’s inspirations are drawn from the concepts and philosophies of Street Art culture and illustration and use aerosol, acrylic paint and various graphic design techniques to construct pieces in varying styles, scales and surfaces. He uses visual arts to amplify both his surrounding environments and the narratives contained within them. Originally from Omaha, Nebraska, LeFlore now calls the Twin Cities home.

LeFlore’s visual arts style and identity grew from the wonder and excitement he felt from first seeing murals and illustrations as a child. These works of art influenced him to learn various graphic design and illustrative techniques commonly seen in the comic books, animations and pop culture elements of the 90s and early 2000s. As LeFlore’s peers and the adults in his life worked to support his newly found creative endeavors, he became inspired by their stories and journeys, which brought forth the narrative aspect of his work.

As he grew as an artist, LeFlore became more grounded in his understanding of art’s purpose within society. After observing the impact of studio projects, murals and public art over the past few decades, he felt that it was time to embrace the responsibilities and privileges he harbored as a visual artist. Through recent projects, LeFlore has gained an understanding of what it means to truly create for communities and of our human experiences, which has been strengthened through collaborative efforts, personal experience, space and opportunity, and his overarching love for the arts.

The mural officially launches as a part of Downtown MPLS Street Art Festival on Thursday, Aug 12 at an “unveiling” event including a DJ spinning beats all day, dance performances, refreshments and food. 3rd Lair skatepark will create a pop-up skate park at the mural location and limited edition prints of the mural will be available for fans.