“It’s the People” is presented by Hennepin Theatre Trust with support from UBS Wealth Management USA and Clear Channel Outdoor. 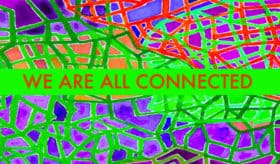 When the COVID-19 pandemic erased work for artists throughout Minnesota, Hennepin Theatre Trust partnered with Clear Channel Outdoor to get artists working.

December in the District

If you’re missing the sounds of the holiday season in the Hennepin Theatre District as much as we are, here are some tunes to take you down memory lane.

Minnesota artists meet the moment with It’s the People

We have seen Minnesota artists meet moment after challenging moment in 2020 with creativity and passion. One reason they have been able to do that through such large-scale societal events as pandemics, economic crises and exploding racial tensions is that they have already been doing that work.

“It’s taking something dangerous and damaging and creating something beautiful and useful,” explained artist Nikki McComb about her work through Art is My Weapon, which turns decommissioned guns into works of art. 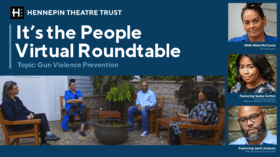 McComb is one of the artists featured in Hennepin Theatre Trust’s 2020 installation of It’s the People, a public art project inspired by the people whose experiences and stories create the unique vibrancy of Hennepin Avenue. This year’s work explores themes of identity, empowerment, trans equity, community outreach through violence prevention and social justice for missing and murdered Indigenous women.

Hennepin Theatre Trust, in partnership with UBS Wealth Management USA and Clear Channel Outdoor, has launched a four-part series of roundtable discussions to delve into the topics featured in It’s the People. In the series, portrait photographers, subjects of the portraits and community experts explore the themes that the portraits address in approachable, engaging conversations. 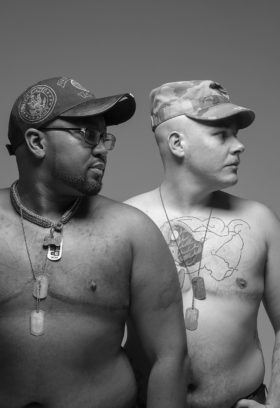 McComb explores gun violence prevention because it’s a space that she works in every day, along with helping people at risk for violence and community and city leaders who are also working to keep Minneapolis safer. Her portrait features those leaders, because she wanted to give them the accolades she believes they deserve. One of those leaders is Jamil Jackson, who is featured in a roundtable discussion. Jackson works to bridge the gap between police and the community and says one of his goals is to support constitutional freedoms, including the second amendment.

“We’re showing a whole new perspective of men of color with guns,” said Jackson. “Usually in our community when you see a Black man with a weapon, he’s usually viewed as a criminal. Being able to stand with our community and show them that we’re here holding the police accountable and also inward facing at our community and not just holding them accountable but also having conversations of what that accountability looks like, how it’s our responsibility to play a role in this.“

It’s the People artist Ryan Coit also focused on lifting up community leaders. Coit featured high-ranking trans-identifying Army veterans as the subjects of the photo, saying he wants people to feel their power and courage.

Artist Chad Germann also focused on an issue that impacts his community. Germann is an enrolled member of the Mille Lacs Band of Ojibwe Tribe of Minnesota. He selected the theme of murdered and missing Indigenous woman and girls because it doesn’t get enough attention. “I hope that people see my work and say ‘I wonder why that Native American mother is hiding her daughter’s face from us. I should Google Native American women’s issues…’,” said Germann.

For a roundtable discussion, Germann is joined by Cristina Melzer and Sarah Andersen of the Native American Community Clinic. Both women share personal stories of how their lives, along with the lives of their friends and family, have been affected by violence and how they are fighting the issue. Andersen says part of the issue of violence against Indigenous woman and girls starts with the hyper-sexualization of their bodies. She shares advice that is crucial for Native families but can be helpful to anyone: “Making sure conversations are happening at a young age. Don’t normalize being overly physically intimate with anyone.” She also says it’s important to make sure your kids know they can trust you and talk to you if they need to.

Communicating with young people is an issue that is apparent in the work led by artist Kristine Heykants, though it’s not her work that is front and center in the It’s the People public art project. Heykants led high school students from the FAIR School in downtown Minneapolis in creating portraits. She taught them principles of portraiture, while also exploring identity through the lens of photography. Joan Vorderbruggen, Director of Hennepin Theatre District Engagement for Hennepin Theatre Trust, leads each of the roundtable discussions. She focuses on each person’s story, as well as how they are working to improve life in the Twin Cities and how anyone can get involved with these important issues. She notes that it’s also important to see how art can push conversation in important directions.

“It’s encouraging listening how these discussions generate additional, and at times unexpected, insight and interpretation to both the artwork and the themes they represent,” said Vorderbruggen.

The idea of going beyond the canvas and exploring societal issues with in-depth conversation resonated with Stephen Glynn, Managing Director and Market Head for the Minnesota-Northern Plains Market at UBS Wealth Management USA, which made the It’s the People project possible.

“We’re pleased that our collaboration with Hennepin Theatre Trust and Clear Channel Outdoor for It’s the People provides ongoing reflection of the It’s the People initiative leading to thought-provoking inspiration,” said Glynn. “As the pandemic continues to be a challenging time for people to connect with one another in person, the roundtable series creates an innovative opportunity to spark deeper discussions, ask questions and examine ideas more thoughtfully.”

The roundtable conversations can all be viewed online.

“While we’d prefer to host these opportunities in person, I’m excited that these conversations will have a life online beyond the actual discussion,” said Vorderbruggen.

watch the “It’s the People” roundtables